With the theme of "Better City, Better Life", participants of Expo Shanghai 2010 displayed urban civilization to the full extent, exchanged their experiences of urban development, disseminated advanced notions on cities and explored new approaches to human habitat, lifestyle and working conditions in the new century. In this way, they vividly demonstrated how to create an eco-friendly society and maintain a sustainable development of human beings.

In the Expo site, based on their understanding of urban theme, participants meticulously designed pavilions and planned exhibition content. Each pavilion has its own unique charm. The site for 2010 Shanghai Expo was divided into five functional zones, namely, Zone A, B, C, D and E, among which, the former three and the latter two are located at Pudong and Puxi area respectively. Specifically, Zone A mainly hosted Asian national pavilions, Zone B Urbanian, City Being and Urban Planet, Pavilions of Asian and Oceanian countries and international Organizations, Zone C European, American and African national pavilions, Zone D Urban Footprints and Corporate Pavilions, Zone E Urban Future, Corporate Pavilions and Urban Best Practices Areas, etc.

[ Emblem ]
Taking the shape of the Chinese character for “world”("世"), the Expo emblem represents three people–you, me, him/her– holding hands together and symbolizes the happy family of mankind. It conveys the Expo's concept of “comprehension, communication, congregation, and cooperation”, highlighting the human-centric aspiration of the Expo 2010 Shanghai. 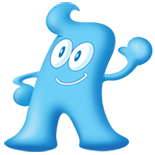 Haibao literally means the treasure of the sea. Created from the Chinese character for people(人), the mascot embodies the characteristics of Chinese culture and echoes with the designing concept of the Expo emblem. The name "HaiBao" is catchy, echoes with the color of its body and is a typical lucky name in Chinese folk culture. Furthermore, "Haibao" is inextricably linked with its image and has auspicious connotations.

The main body of the Expo logo stands for the Chinese character for heart("心"), the English letter "V" and a dove of peace carrying an olive branch. It not only embodies the characteristics of Chinese culture, but also shapes the image of an attentive and warmhearted volunteer. "V" is the first letter of "Volunteer", stands for the group the logo represented and gives a clear meaning to it; flying dove stands for Shanghai, also symbolizes peace and friendship, olive branch stands for sustainable development and hope and conveys the Expo theme -"Better City, Better Life".